Mentioning Twitter in a room full of educators always gets a diverse response. You have those who think Twitter is just another social networking site to keep up with all the Hollywood gossip and they would never fathom having an account. While the opposite spectrum has come to realize how powerful Twitter can be as an educational resource. I strongly believe that once educators can see the value of using Twitter as a Professional Learning Network they will become a fan themselves. But you can't become a fan unless you jump in and see the power yourself.

Perhaps you are already a Twitter fan! Use these resources to help get other educators on the Twitter train. The more we can get people sharing their vast knowledge and great resources the stronger we become as educators.

Understanding Twitter Here is a Twitter for Educators resource I created to help educators become familiar with Twitter. The best way to see the power of Twitter is to jump in and see what it is all about.

I am not on Twitter 24/7. In fact there are days that I go where I don't have time to jump onto Twitter at all. I have come to realize that is okay even though I know I am missing out on some great sharing. When I am on Twitter I use Tweetdeck to keep up with all the great posts.  For those who are not familiar with Tweetdeck it allows you to create columns so you can see all the activity from those you follow, hashtags that interest you, lists you have created, and more. Here is Tweetdeck in a Nutshell to help you better understand how to use this amazing web application. 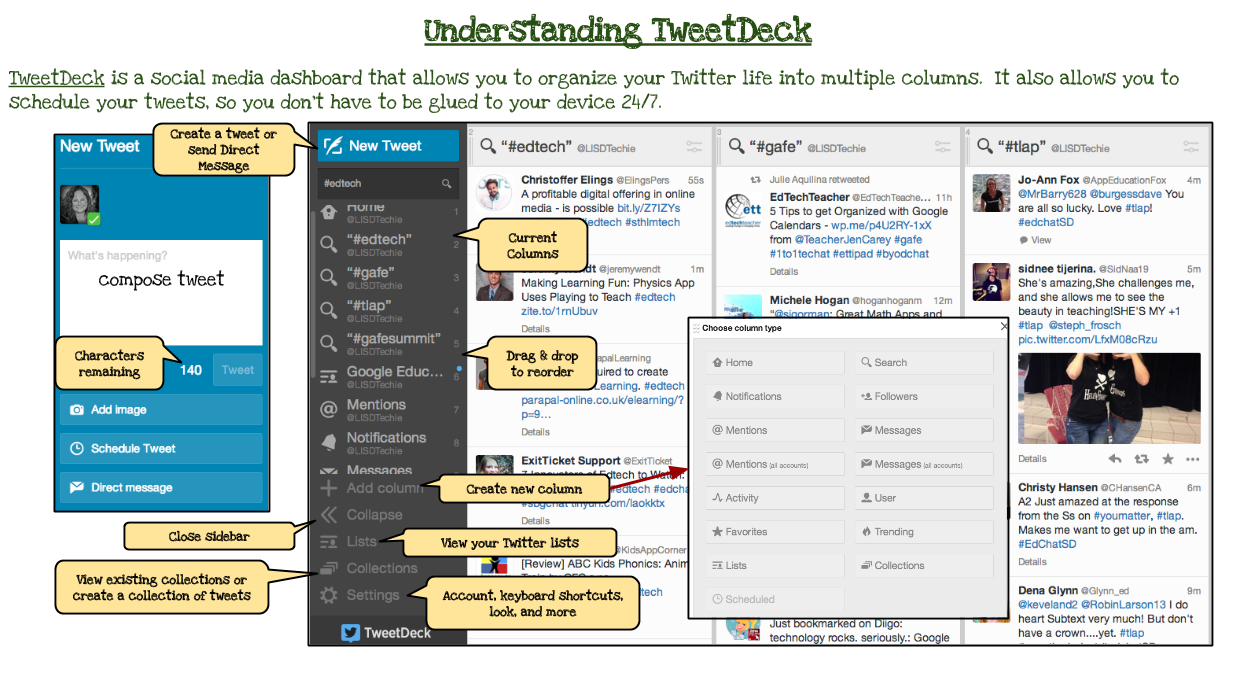 Finding People to Follow
The hardest part of using Twitter is figuring out who to follow. The best advice I can give you is find some teachers you know and admire on Twitter and see who they follow. Once you start following someone if you don't find their posts valuable, then you can easily unfollow them. If you don't know where to start check out Jerry Blumengarten's (@Cybrayman1) PLN Twitter list.


Using Twitter in Education
Twitter is very popular right now, so why not use the tool in the classroom. Here are some ideas on using Twitter to engage students and parents. Additional Resources from Great Educators
Now I know I am not the expert on Twitter. There are so many great resources out there all you have to do is search. Here are some that I have gathered in the past that I want to share. I listed the name of the website page/blog entry and the person who wrote it. If I knew the author's Twitter handle, then I hyperlinked the person's name to their account so you can start following them.


10 Steps for Educators New to Twitter by Justin Tarte

Why and How Teachers are Using Twitter by Katie Lepi

The Complete Guide To Twitter Hashtags For Education by Te@chThought


Establishing a Twitter Routine in Your Classroom by Te@chThought

I am the Dean of Instruction at Rouse High School in Leander ISD. Go Raiders! I am passionate about educating students and teachers and all your can do with devices. I certainly don't believe that paper should never be used, but I do believe that a device can open up a world of possibilities.
I am also active on Twitter and my website is filled with resources.